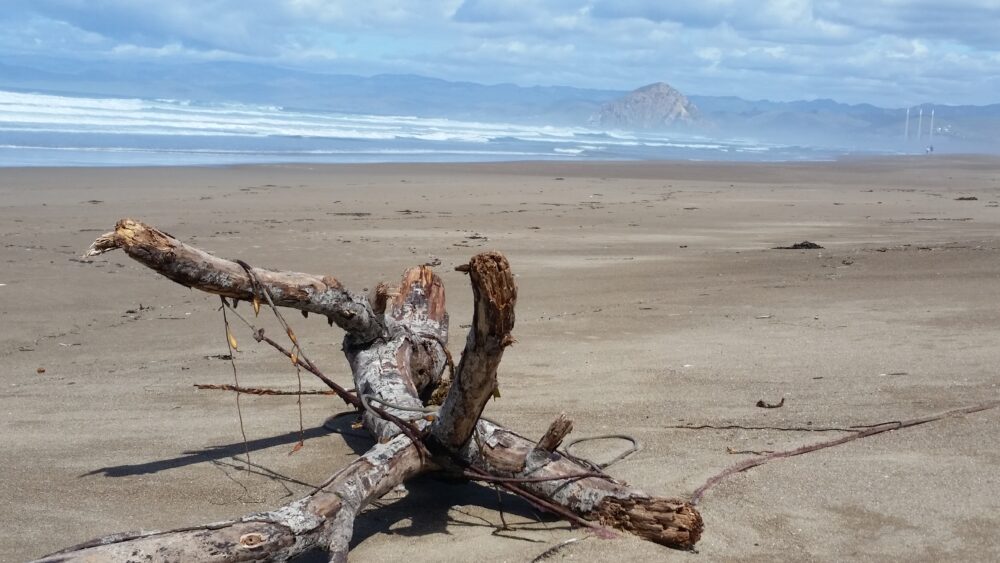 Sand Spit doesn’t sound like much of a name for a beach with miles and miles of wild, natural beauty. Sounds more like something ugly or dangerous. And it probably was dangerous when it was a staging area for World War II D-Day training. But this hidden stretch of Montaña de Oro coastline is my favorite beach!

As a recent transplant from southern California, I’ve only known developed beaches with boardwalks, commercial districts, piers and throngs of beach-goers. Many, many throngs of beach-goers. I had heard and read about Montaña de Oro. When my wife and I moved to the Central Coast, we immediately made the drive out past Los Osos and Baywood, and negotiated the narrow winding road to the State Park. The bluff trail, Spooner’s Cove…beautiful State Park attractions. It’s only after getting to know some long-time area residents that we heard about Sand Spit.

You can see the long stretch of beach below the bluffs to the west on the drive into the park. But there aren’t any signs for most of the access points. And the main access point sign is easy to miss. You gotta have a guide book or local knowledge to know where to go, where to park. Upon the recommendation of neighbors, we finally took a right just past the sign and reached the Sand Spit Beach parking lot.

From the parking lot, the “boardwalk” here is about ¼ mile improved trail that winds down through the dunes and ice plant to the water. Where the improved trail ends there is still about 50 yards of downhill through soft white sand before reaching the water. Here you enter a wild, natural coastline that stretches from the bluffs to the south and to the Morro Bay jetty to the north. In between is a naturalist’s paradise.

To the south, there is about 1 ½ miles of bluff protected beach till the sand disappears and is replaced by slate and sandstone formations, cliffs and tide pools, making forward progress on foot more difficult. But why would you want to go farther when there are tide pools! And, according to the fishermen I met, great sand perch fishing!

To the north is a five mile stretch of unspoiled beach for hardy hikers and runners who like their beaches wild and untamed. Get past the handful of surfers, the occasional horse person and you have the beach to yourself. Rather you share it with the inhabitants who’ve called this place home for thousands of years.

Instead of taco and burger stands there are snowy plover nesting grounds in and among the dunes. You may catch sight of one of these endangered birds or even a kit fox hunting in the ice plants. I’ve seen both.

Instead of single engine airplanes towing banner advertising, the sky might contain turkey vultures circling the carcass of a sea lion. Look a little closer and you may see osprey or kestrel or red tailed hawk. In the surf, skittering groups of sand pipers and curlews plunging their beaks into the sand seeking to stab a sand crab for lunch. Flying over the ocean, the ubiquitous western gull.

Instead of soda cans and cigarette butts, everywhere sea spray, mounds of kelp, shells and ocean carved stones. Carved and polished by tide and current and crustacean. Large, small, tiny. Grey, black, brown, green, red. With holes and swoops and arcs and spirals.

Some people search for sea glass. Give me sea stones any day!

Instead of fire rings and umbrellas, there are jelly fish, sand crab shells from the season’s molt, pink abalone shells and every manner of sea vegetation such as eel grass and pickle weed that provided protected habitat for schools of fish until thrust ashore by storm surge and tide.

Instead of pier and oil platforms, there is drift wood. Shaped by sea and tide like the stones, the formation process for drift wood is much shorter but the result is just as marvelous. A coastal tree uprooted or broken, stumps and branches find their way via stream or river to the sea. From miles and miles away…perhaps even from across the ocean. And then smoothed by water and time and thrust upon the beach by wind or storm. Such would be trash at the more developed beaches. Detritus to be raked up and hauled away to a landfill.

Here the rocks, the driftwood, the seaweed, the birds, the mammals, including us human visitors, make up the tiles of the Montaña de Oro Sand Spit Beach mosaic.

It’s got a name that sounds a bit odd. Not dangerous, but truly a wild and natural work of art. 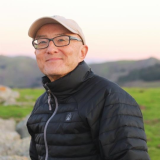 I am a married father of three YAKs – that's Young Adult Kids! After 30 years living and working in southern California, we moved to read, write, hike and bike on the Central Coast. It's great to look inside, look around, look up, look down and see stars everywhere!